I did not do jackspit New Year's Eve. I meant to hang out with Alex at his show, but just felt worn down the whole day, so being around lots of people for several hours sounded like a bad idea. Last new comic review of 2019. Next week, Year in Review posts run Monday through Friday.

The Customs Officer and the historian are still exploring to pass the time and find another of those hologram balls. As it turns out, the thing is somehow able to communicate with the souls of the deceased. Before that can be explored, they meet some sentient fungus thing. The fungus thing asks them to help him hunt down some odd red creatures that it's at war with, but the historian zaps it because he figures it's going to kill them for not being like it. I'm not sure how accurate that is, but anyway, there appears to be some vast, invisible network that connects all those corpses the hologram thing can tie into, and they're gonna go look for the hub. There's only 30 minutes until they're supposed to meet the ones who created this vast necropolis, so I'm not sure they really have time for this.

I guess that's going to have to be how they fail this mission. Most of the others failed because they didn't know what they were looking for, or they had something else going on. Their own agenda, or in the case of Patty Stardust, an ongoing investigation she was trying not to blow while doing this. These two know exactly where they're supposed to be and when, but their detour to kill some time is going to end up delaying them too long. 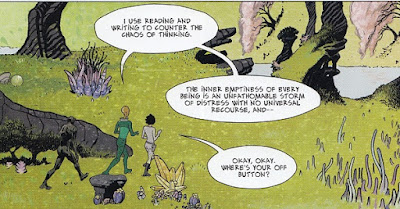 Biancarelli's art reminds me a little of the late Seth Fisher's, mostly just in how he draws the historian. It reminds of me how Fisher drew Robotman in those two issues of Jon Arcudi's Doom Patrol. Something about the angle of the neck, the posture, the somewhat googly-eyes. Otherwise, Biancarelli's work isn't nearly as busy as Fisher's, but he has a good knack for landscapes. The vast difference between the idyllic place the fungus creatures invites them into and the empty honeycomb passages where they first encountered it. He draws the fungus creature with this slightly hunched over posture where its arms just hang down limply, which is a nice touch. It makes the body look a bit puppetlike, since the creature can just create another as need be. The arms are there to make a rough approximation of the two creatures its talking to, but the idea of moving them during walking doesn't register.
Posted by CalvinPitt at 7:28 PM