Family Is The Hardest To Trust 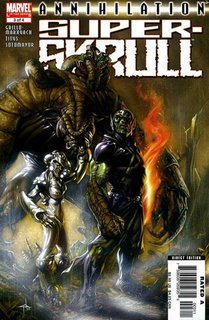 Super-Skrull has thus far been accompanied by R'Kin, an apparent Skrull child, that's a mechanical whiz. In #1, SS, told Reed Richards that it was foolish to assume R'Kin was a child, merely because that's what he looked like. In #2, R'Kin's childlike nature was seemingly revealed when he was horrified that Super Skrull would kill someone who had provided useful information. In #3, R'Kin offers to pilot the viral missile that can destroy the Harvester of Sorrows, only to betray his comrades. I offer this prediction:

R'Kin is Super-Skrull's son, the one he's trying so hard to save.

I was thinking about it. R'Kin said his father "died at the Battle of Harkoon alongside Super-Skrull". Harkoon is the battle which earned Super-Skrull the marriage to the countess. Maybe the kid meant "died" as in that was the "last time his father was successful in battle", the last time the child was allowed to be proud of the father? We don't know whether his son knew he was there when the kid (named Sarnogg) when the kid drank the bile of a live G'Rang beast, but what could be a better disguise for a kid with obvious warrior skills than as a weakling whose area of expertise is mechanics? And it seems likely he could have been turned against his father, not by the Annihilation Wave forces, but by his mother, who did send Super-Skrull away as his win-loss record deteriorated. As for how the kid got out in space, and why he betrays dear ol' dad? If he's as strong a warrior as Super-Skrull hints at, he was fighting on the front lines, and chose to help his father. Possibly out of some concern for him, or because he was impressed by his determination. As for the betrayal, Super-Skrull did tell him that a warrior does whatever it takes, end of discussion. Except he didn't finish the statement, because he doesn't say what it is you're trying to accomplish. Victory? Survival? Clearly, the kid chose "survival".

Plus this would seem to fit with the themes running through this of trust, family, honor. Super-Skrull is not what we might consider honorable, given his win at all costs mentality. He trusts almost no one, and really had no family. But when this series kicked off he was forced to trust, and develop alliances. He had to count on Reed Richards to not just blast him on sight, and hear him out. Trust the kid to build the portal. Trust the prisoners to fight with him. And while it may not have been a family, he was forming a unit.

Now, who knows? I think this'll probably set-up a running theme through the Annihilation series, where the other players can't get Super-Skrull to be a team player. He's tried that route, and it appears to have blown up in his face.

Man I love making predictions. One of these days I might even be right about one.
Posted by CalvinPitt at 12:24 PM