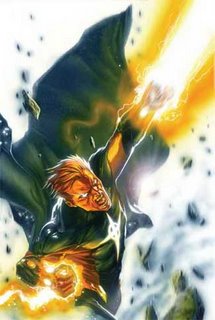 How weird is it to see a comic cover that tries to make Quasar look intimidating, or at least really pissed off? With him, I'd shoot for a cover that depicts speed and grace, or maybe power, but not anger. Doesn't fit with what I remember of the character, which I grant you ain't much. Anyhoo.

In the March 2006 Scientific American, there's an article that discussed how the greatest threat to manned space flights to Mars and beyond isn't things like asteroids, but cosmic rays. This is due to the fact that out there, the people wouldn't have the nice barriers provided by Earth's atmosphere and magnetic field, only whatever protection their ship could provide, which as spaceflight tech stands now, really isn't that much. And of course, prolonged exposure to cosmic rays can lead to all sorts of mutations and genetic abnormalities. Just ask the Fantastic Four. Or the U-Foes. Or look at what even UV rays can do to you over years of exposure: breaking your DNA apart, which means it may not reconnect properly. Why the heck am I bringing this up?

Because Nova and Quasar appear to be suffering the effects of running around in space without proper shielding for too long. You should look at their faces, they have that kind of Robert Redford "tanned and worn leather" look going. Yipes. That was a lot of yakking for a pretty meager joke, if one can even call it that. Credit to Walker though; Annihilus looks pretty cool and menacing, and that panel of Nova tearing up through the atmosphere to get to the battle was very nice. I really liked that.

Quasar did come off as a bit of a smartass in this issue, which is fine. I liked that 'Should I signal the Avengers? The Imperial Guard?' line. Drax has been pushing Nova around pretty easily, given Nova's uncertainty over his power, but Quasar don't play that, no way Drax. And he seems very cool under fire, especially for a guy named "Wendell". Makes me wonder just what the hell he's been dealing with out there in space, that he can be pretty calmly handling a mass evacuation and fighting off the intial ships of the Annihilation Wave. I do remember he died fighting a guy who wanted to suck the universe into a black hole (Maelstrom?), only to return and triumph. I suppose that could have a maturing effect.

Is it sad that when Drax said 'I had a conversation with his hat.' I didn't laugh because I was thinking "It's a helmet."?
Posted by CalvinPitt at 1:57 PM

But you know what, I don't mind Wendell getting a little snarky there. I don't mind that he looks all overly bad ass on that cover. I don't mind because it's the first book in awhile to give that poor guy some respect. He's fighting the good fight and they just don't give nega-bands ot just anyone. No, he's a hero, despite his meager beginnings and I can dig it.

Such a shame he seems so slated to die...