When Did The Bloom Fall Off The Rose? 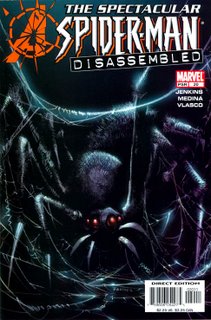 Friday, Scipio posted a review of a discussion he and Devon attended. To me, the most interesting comment, on a personal level, was what Scipio labeled an Unpleasant Unfortunate truth, courtesy of Tom DeFalco. Basically, that the Big Two will do certain storylines with the idea that it will piss off readers, because impassioned fan outcry seems to boost sales. I guess it's part of that "slow down and watch the car wreck" mentality. Technically, DeFalco was only speaking from personal experience, which would probably limit it to Marvel, but I've read enough to know DC pulls the same crap, so I'm tossing them in as well.

My first instinct was to make a snarky comment, something like 'I am shocked - shocked! - to hear that comics companies are intentionally trying to anger me to boost their sales figures!' But, that wouldn't have really added anything to the discussion (Scipio does snark in a much better manner), and I didn't feel much like channeling Claude Rains. Besides, I found myself wondering, when the hell did I get like that? That my reaction to such a statement is sarcasm, rather than actual surprise?

It wasn't in the '80s, because that's when I started reading comics, so everything was new to me, and I didn't totally understand how the world of comics worked. It wasn't even the '90s, which was mostly just me feeling lost as massive X-Crossovers and Clone Sagas roamed across 40 books, leaving me unable to keep up. Heck, when I made a serious return to comics in fall of 2000, I was still fairly upbeat and I suppose, naive.

I honestly don't think that there was any one event that brought it home, this realization that the people in charge at DC and Marvel were screwing with us. Rather, it was a combination of four: 1) Spider-Man gets organic web-shooters, courtesy of Disassembled. It made no sense, other than the fact it matched the movie, which seemed like a stupid reason to do something. 2) War Games, and the Stephanie Brown death. Pointless, occurred only because certain characters were written massively out-of-character. 3) Jack Drake's death, which combined with #2 to bollocks up Willingham's run on Robin, for the purposes of some P.O.S. mystery, and I use that term loosely. 4) The fact that pretty much all the characters in Avengers I really liked either died (Scott Lang, Hawkeye), or were knocked into near-oblivion (Kelsey Leigh) by Avengers Dissassembled.

All of it fostered this massive anger in me, but also left me picking up books to see if maybe the characters would have turned out to have survived after all, or they were injured, but now they're back. Books that, given my frustration, I shouldn't have been buying. And thus I realized I was being duped.

So here's my question: Have you reached a point where you feel you care for the characters more than the people in charge of them? And if so, what was the event that left to that?
Posted by CalvinPitt at 2:48 PM

Emerald Twilight, where Hal went off the rails and killed the entire GL corps. Nothing in his history led up to that moment (although Geoff Johns did a pretty good job making it look that way a decade or so later...), and one of my favorite heroes became the lame-ass heavy in a lame-ass cross-over, Zero Hour.

Although Kyle was a good enough character, especially in Morrison's hands, it seemed that DC was always trying to make up for that blunder.
(Look, Hal's sacrificed himself to save the Earth! Now he's the Spectre!!)

Not quite the same, but for Marvel it was the Clone saga. That was sooo drawn out and sooo stupid, that Marvel has - in my eyes, at least - been unable to string together a decent Spidey run in the mainstream, in-continuity comics comics ever again.

Iron Man, of course. Because once they had Tony reveal his identity for no particulalry good reason then let Ellis fuck his powers up, it was clear that Marvel had no idea what to do with the character.

And to a lesser extent Dr. Strange, because I think it's an undeniably cool premise being used as nothing more than a plot device as Marvel at this point.

The Incredible Hulk, right after Jenkins's phenominal run, Bruce Jones's second issue. That's when he first hit me, officer. That's when I realized that Marvel wasn't just dropping the ball, they were dropkicking it.
I know that 'reading it to see if maybe this is all a dream' feeling. I own way too many of those issues otherwise.

I second Iron Man... especially now that it seems like Marvel is turning him into a villain.

Oh, and I still don't get why Cap went rogue instead of just, I don't know, testifying against the act before Congress. It's really stupid, and totally out of character.

(I also don't get how a fighter jet just happened to be flying by when he jumped out of the Helicarrier in Civil War #1. That's weird.)

i know im poping up all over..dude your blog is the cats meow! so much marvel stuff to go over.
honestly im one of those under cover fans so i got no one to talk comics with or ramble on with because ..normal pepole just dont get us.

im a huge fan of x-men ever since i was lil gabe summers.love them..not "buy all the toys and have x-men sheets" love them but "ok this is horrible but i got almost the whole run so ill keep buying it " kinda love.

other comics i drop or go back to x-men is the only one im faithful to so to speak..i buy anything x-related ..at times i have felt that some choices made were so lame..like milligans choice to do yet another "are rouge and remy gonna last" story or the choice to make magneto into xorn(honestly if it was magneto then thats one of the best mag stroies ever..the way he tricked everyone the way he cut prof xs "strings" classic) but i also see it as life..in life things just happen you cant control..like mrs garett use to say "you take the good you take the bad...etc." so altho i may not like whats going on..i do know that sooner or later things will pick up a new team will come and things will be good.i will also say that i began going to sites like comic x-fan and cgr 2 years ago and to be honest..its the message boards that make me jaded..thier have been times i thought something was so cool..but a person would bash it so well that it changed my mind...the only issue i really have with the big 2 is ...i dont think editors or writers know what they are writing they may have a cool sotry or a cool spin..but at times it seems they have no clue..i think it should be mandatory for that to take place..you want to write ff ok read the whole run and if sue gets hurt in atlantis attacks well you better have read that issue to. thats what irks me is they dotn know things at times..or they dont communicate.
if i had gotten a job at sayy general motors im sure as a super or manger id be required to know how to do the job functions..i might have to learn a bit about the history of gm ..im sure id have to be knowledgeable in thier cars etc.
soo when a writer does something that makes no sence it bothers me...as you had pointed out in a recent post how jms had stark bring spidey along then bashed him..and that was the same writer!!!
it just seems to me at times..that the big 2 try so hard to make inpact and changes..that they lose sight of whats going on...like how super skrull is in "young avengers" yet hes to be in anahlation.
in young avengers to make it quick..ss pretends to be the son of marvel to spy on both the kree and the skrulls..so if hes doing that for his king (hulkling)then how is fighting the wave?
orrrrrr how in the x-titles ..in some titles they show mo sentienls in others they do..it seems so dissorganized that to me bothers to no end.
at those times i feel it..like im more into this then them..