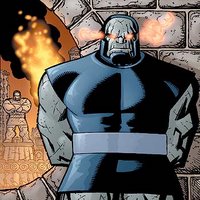 On Thursday, Jack was going through the new Wizard. Specifically, he was reading their "100 Greatest Villains" list to Len and me. I'm going to ignore the obvious pandering of the Joker as #1 (really, when you're not confining yourself to comics, you're including movies and literature, and some crazy-ass clown is #1?), and the fact that they seem to confuse "villain" with "force the protagonist is set against", such as the shark from Jaws. It's a force of nature, with no malice, just trying to survive, even if Spielberg (and Benchley) and try to portray it as having a grudge against the crew of the Orca. This post is about two characters that were in the low twenties, mirrors of each other, one of them one spot ahead of the other. I mean Darkseid and Thanos, with Thanos having been considered superior.

Len seemed to feel this was backwards. I felt that it wasn't, because Thanos had once killed half the universe and become the living embodiment of the rest, which I'm pretty sure Darkseid can't match. Len felt that was the problem: Thanos peaked with Infinity Gauntlet, and he'd never inspire the same level of "Oh, shit!" reaction again, whereas Darkseid could still reach new heights in that regard. Personally, I think Thanos can still be the greater threat, especially written a certain way, and it boils down to what I've interpreted as the difference between the two (the key here, to me, would be to be well-written, which is always dicey).

Darkseid - Darkseid wants to use this fabled "anti-life equation" to bring the whole universe under his heel, ostensibly to bring order to it. The key, of course, is that it be under his control. I doubt that if Tim Drake stumbled across the equation and used it (not sure I would put it past Teen Titans Tim), Darkseid would be all that pleased the universe had been put in order. That gives his scheme more of a personal touch than say, the Borg's "assimilate everyone" plan. To accomplish his goals, Darkseid commands a wide variety of scientists, spies, warriors, underlings, etc. But at the end of the day, he feels he's got time, so if things are being fouled up by say, a certain Kryptonian, he's willing to call it off, and withdraw, and wait for a more opportune moment. It feels very bottom-line.

Thanos - Thanos, at least the one I've read, loves Death. Admires the fact that Death is the ultimate power of the universe, that conquers everyone and everything eventually. He wants to demonstrate, through his actions as its servant, that he's worthy of Death returning his love. How that would work is a mystery to me, but it seems to be his desire, and it's nice to have goals. He typically works alone, but like Darkseid, can create these huge, grandiose schemes, all to prove his devotion to Death. However, he should have a much harder time letting go of those plans if things start to go south.

Because here's the critical difference to me: Because Thanos is motivated by love, which thus far has been unrequited, he's got an air of desperation to him that Darkseid lacks. Thanos has been trying for years to gain Death's affections, and it's never worked. He's still regarded as nothing more than another servant, no different from Cletus Kasady (Carnage), or a supernova, though somewhat more effective. That's going to drive him, push him. Yes, he can't kill half the people in the universe again; the last time he tried that, Death actually turned against him. But perhaps it isn't the quantity, but the quality that would be important. To destroy those who most often defy or escape Death's grasp. That could be various heroes, or it could be some of the more cosmic beings, that have been around for eons.

I think at their best neither character should be used often, one every 3 to 8 years, tops. What you do in the interim, is drop hints of their newest scheme in a few books. Say, in 2008 Marvel has in two different titles - one issue each - something that hints at a greater threat. Doesn't have to point to Thanos, could be attributed to whatever threat was being dealt with in the title at that time (say, the Mole Man). Then in '09, maybe five comics. 2010, ten or eleven comics. Things start to tie together more, you can see it building, maybe some of the heroes can see it too; how it synchs up with what happened in '08. Then in 2011, Thanos (or Darkseid) puts whatever highly complex and convoluted plan they've been unveiling into motion, and the heroes have to scramble to stop it.

Obviously, the villains lose (this is comics after all, good's gotta triumph, if for no other reason than I say so), but I think the difference would be highlighted. Eventually Darkseid would realize that even if he won whatever battle his forces were engaged in, the losses would make the cost too high, or would cost him too much time to succeed in his greater strategy. The day lost, he'd withdraw, though probably not before striking down some brave superfluous character (by 2011, it's probably the current Blue Beetle or the new Batwoman, who're being shoved aside for newer versions), and you wouldn't see him again until, oh 2018 or so, when he kicks his new grand scheme into high gear.

With Thanos though, there wouldn't be withdrawal. Couldn't be. For him, it isn't just the success that's important, it's the attempt. Continuing forward regardless of what's placed before him would be his way of proving that he truly loves Death, irregardless of cost. Of course, this probably means even more deaths of lower-tier characters than the Darkseid story, but that's the way it goes I suppose. He'd have to be battered until he simply couldn't rise to keep going anymore. Then he'd be imprisoned, and use the time to heal, and prepare his next attempt, which you'd see around 2016 (Marvel seems to squish these things together too much, you know).

A few problems here, especially for Thanos, but in no particular order: First, too much creative turnover to guarantee it could continue to build for four or five years. The writer behind it gets fed up with the company and leaves, then where are you? Second, eventually Thanos would get to the point where the only way his story could end, after say three or four of these failures, is him realizing the only way to gain acceptance from Death was to die himself. That's why you spread the appearances out, by the time that happens, it's something like 2035, you've gotten sixty years out of him, you can let him go. Whether it's with lots of other deaths, or just himself, I'd leave up to the creators. Third, Thanos runs the risk off coming off as really pathetic in this, or at least really whipped. You'd have to make sure to show he does enjoy the power he's gaining from this scheme, in addition to his hopes of acceptance by Death. And you'd need someone who could write a pseudo-love story well. How about the person who writes Spider-Man Loves Mary Jane? No, I'm not joking, the love part is important, and needs to be portrayed well. 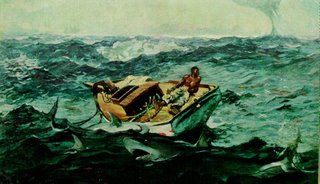 Alright, I've rambled well off track, and may have talked more about how I think the characters should be, then how they actually are, but let me try to bring this together. The thing that - to me - makes Thanos a greater villain, is passion. There's more emotion in what he does, and while that can also make him easier to defeat, it makes him more driven, and dangerous to the people who are trying to stop him. It's the difference between Winslow Homer painting Gulf Stream, and me doing a paint-by-the-numbers recreation of it. I'd really try, I'd want to do a good job , and I'd be frustrated when I failed, but, even if I did a perfect job, it still wouldn't be as good, because it lacks whatever Holmes felt when he made the original.

Wow, I think that's my first artistic comparison on this blog. Free drinks for all!
Posted by CalvinPitt at 12:01 PM

Ha thanos will never manage to take Death away from Deadpool.
my theory is that she treats him like a servent because he acts like one, while Deadpool actually tries to hit on her telling jokes and stuff.
plus Deadpool has killed a cosmic messiah who would have brought eternal bliss to everyone in the universe, how many of those did thanos killed?

anonymous: you know, I did think once that it might help Thanos' chances if he actually tried to romance her, rather than constantly remind her that she's the emdbodiment of something that's widely feared and despised.

You know some flowers, candy, maybe some curtains to brighten up her home. A mariachi band.

Bah. Darkseid has no use for this weakness known as "love."