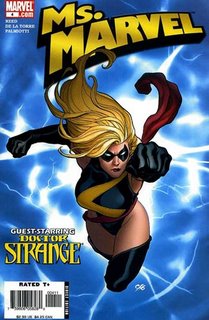 - OK, Strange says he bound Traveler with the Crimson Bands of Cytorrak. Great, except I don't see anything crimson holding the guy. I do see some stuff that's brown, looks suspiciously like packing tape. C'mon Doc, save that stuff for when you put antiquated books on Ebay, not when you're holding a guy who's got considerable, if possibly uncontrolled, mystical power.

- And why would you leave the Wand of Watoomb sitting out in broad daylight over your fireplace? The first time I saw that was your first meeting with Spider-Man, when a mage sent some hypnotized super-goons to steal it, and you were at least hiding it in a cabinet then.

- And when the hell did Wong start sporting the Alfred Pennyworth look? A white suit, with a green tie? OK, those aren't Alfie's colors, but it's his style of attire. Wong wears meditative green robes. Maybe he and Jarvis are double-dating these days? Now who could Wong be dating? Mistress Clea (behind Strange's back?)? Maybe Shang-Chi's sister? She was going to marry Black Panther, but he shot her down, so. . . I've got no clue, help me out here.

- Is this Warren Traveler any relation to the Judas Traveler that was such a pain in Spider-Man's butt during the Clone Saga (as if Webs didn't have enough to worry about already then)? Probably not, since that guy was apparently strictly low-level psionic, with perception altering powers, while this guy is a time-traveling sorcerer, but you can never tell.

- Doctor Strange has a publicist? What, she helps him get on Conan O'Brien, where he pulls Mindless Ones out of his cape? Wasting his time with that, no wonder he looks so incompetent these days.

- Speaking of publicists, this lady is up to no good. Her building scans information from your cellphone and records it? Why do I have the distinct feeling that little nugget is going to bite Carol in the rear sometime in the future? Or maybe not. Does she have friends that aren't in the superhero community, people that could be endangered if the wrong people got her cellphone records?

- Never mind. Carol doesn't have any non-superhero friends. If Spider-Man is any indication, having friends that aren't costumed adventurers is as taboo as smoking. Way to keep your heroes grounded in our world Joey, because there's no chance people with superpowers and secret identities would still have friends who weren't like them. Idiot.

- When the publicist calls Carol on her new phone, she tells her that until her apartment is repaired, she'll be staying at the Ritz. And here's the part I find interesting. The publicist says 'You're under the name Linda Danvers, since nobody would be interested in that name.'

There's a meaning there, obviously, given that Linda Danvers was Peter David's Angel-Supergirl. Is it a reference to the fact she's apparently no longer in continuity? Were Bill Reed, Roberto De La Torre, or Jimmy Palmiotti involved with that series? Or is it just a shout-out to Peter David, who's Fallen Angel series stars a character somewhat similar to Linda, that he had to switch to IDW because DC got annoyed about it for some reason? Or is it simply a jab at DC? Or all of the above.

- And why exactly isn't Linda Danvers in continuity? She wasn't a Kryptonian, so why does it matter if she called herself Supergirl before this anorexic, annoying twit that has the title now? Honestly, if you want a Kryptonian cousin for Superman, they should have just stuck with Power Girl. With her origin finally settled, and people who can write her well (and interestingly), she was fine for that role, plus calling herself "Power Girl" keeps her from just being a female version of the male character. Just a thought.
Posted by CalvinPitt at 3:18 PM

Well, pre-crisis, when Kara Zor-El lived on Earth, she lived in an orphanage using the name Linda Lee. She was later adopted by the Danvers family. Hence "Linda Danvers."

I think post-Crisis Linda was probably retconned out so Kara can have her secret identity back. Which is a shame, Linda was much more interesting...and sadly, might have been able to stick around with a different name.

kali: Ah, so the name goes back to pre-Crisis times.

As for current Supergirl, all I can say is so far she hasn't seemed too interested in interacting with humans on the level a secret identity would require.

Hmm...I've actually been wondering the same thing about Traveller. I was curious about the whole "history" thing too.

And yep, the current Supergirl would probably fry the first girl who looked at her funny or was bitchy to her (although then we could lock her up with the "Puncher" so I'd be happy)

The current Supergirl hasn't really been given a chance to interact with normal people. She's either off in the 30th century (and written very well) or fighting evil clones (and written not so well) or stuck in Kandor (jury's out.)

For such an ostensibly popular character, DC needs to settle on a direction for Kara and fast.

And, call me old fashioned, but as much as I loved PAD's Supergirl I always considered Silver-Age Kara the "real" Linda Danvers.

And yes, Marvel is taking a shot at DC. A pretty good one, actually.

WHEN did Wong grow all that HAIR?

I guess he stopped shaving his head.
Does that mean he left the "order" that he belonged to?
His father (Hamir the Hermit) took care of the Ancient one as his father before him and so on...in a Mystic Order of Service to all of the Ancient One's Order.

Is this due to the crumbled relationship between DOC and Wong (that no one at Marvel knows is either "fixed" now or not or what?

OR was it just an artist who had no reason to do...oh I dunno...RESEARCH?

Also, WHY is the WAND of WATOOMB so friggin BIG?!
(and the WINGS of NEEDLESS SORROW for that matter - see the big blue wings above the mantle? That's it.)

The WAND was always the length of about 6 or 7 inches - tops!
And the WINGS would fit in the PALM of your hand.

The fact that the WINGS are pictured there AT ALL means that the artist MUST have had SOME visual reference?

However, if I recall...Wong wasn't IN those issues (Strange Tales vol 2), so this artist may NOT have bothered to go any further than that.

I dunno.
Too many visual gaffs (to go with the story gaffs you mentioned).

SOMEONE do your damn homework.
Or at the VERY least, if something is changed dramatically...make some kind of NOTE somewhere. Have someone SAY something about it. Even a single comment.

With all the "decompression" going on, it seems to be all the extra space is filled with nothing of substance.

Isn't the new Traveller guy from the House of M world? So couldn't it be Warren Traveller, if he had parlayed his low-level psychic powers int oa more serious study of the mystic arts?

Either that or no one involved in this ocmic has read any 90s Spider-Man, and is unaware of the resemblence. I'd bet on the latter.