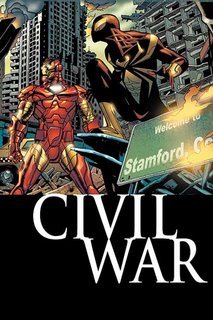 I'm curious, is the registration act going to force everyone with superpowers to come forward, even if they don't use them in a vigilante way? What about someone who, as Max Lord once mentioned, has luck powers that help them win at bingo a lot, but isn't even aware of them? Are they a criminal? How could you prove that they really didn't know they had powers?

That aside, Spider-Man cannot, I repeat CANNOT, reveal his identity to the world. I've already discussed the reasons why in this post, but to sum up, there are entirely too many people that would jump at the chance to kill Spider-Man's loved ones, just before they killed him. And there's no way SHIELD could protect May and MJ. And I'm sure Peter would be off in Madripoor at the time, taking care of something that SHIELD assured him was "evil", so he's not going to be saving the day.

Personally, I think Peter should have asked Tony to use that satellite he has that made everyone forget he was Iron Man, to make May and MJ forget he's Spidey. Then he grabs his money, his costume (thanks Aunt May!), his webshooters, and runs. In essence, he becomes what the Spider-Clone, Ben Reilly was, those five years in between his first appearance, and his return to New York. That way, MJ and May can't be accused of aiding a fugitive, because they no longer have any idea Peter is Spider-Man. Let me put it in terms Quesada would like: Peter would effectively no longer be married. He could not have any contact with Mary Jane, because it would get her arrested. And I'm sure, after awhile, Peter would get lonely out on the road, and well, he's back to dating. Or at least sleeping around. Hooray, Joey gets what he wants.

Sorry, I had to go throw up, after I realized I just suggested Spider-Man should act more like Nightwing. In fact, just typing that made me need to go throw up again.

That last bit aside, I still don't necessarily like this, as I called it yesterday, Fugitive Spider-Man, but it makes a lot more sense than him as an Agent of SHIELD. Spider-Man is supposed to be a hero that suits up to save lives, often without understanding the larger context of what's going on, and that's fine because it doesn't matter. He's going to use his power to help people; that's who he is. Political affiliations and religious beliefs don't matter, the man protected Doctor Doom once, fer pete's sake!

Of course the wrench in my "mindwipe and run" plan is you have to get Stark's help. Like Peter, I'm not sure whether Stark would reveal his identity to the world. I think Stark is trying to minimize collateral damage, and getting MJ and May arrested is probably not something he wants. At the same time, I have no doubt Stark will hunt Spider-Man down if given the order, and that he would use May and MJ to draw Peter back in. Which means he probably would refuse to brainwash them, because as long as they know, they're a lever he can use to manipulate Peter. Keep in mind, he brings up the fact that Peter's decision affects more than just him; he wants any potential suffering May and Mary Jane might go through in the forefront of Parker's brain. Stark is starting to vie why ultimate Nick Fury on my "manipulative bastard" list. And Peter goes along with it, because Stark's "been like a father to him." Ugh. Uncle Ben just rolled over in his grave, and I just threw up on my keyboard. I get that Peter has had a lack of male role models, what with his father dying when he was young, Uncle Ben's death, his father and mother's miraculous return being a twisted plot by Harry Osborn to give Peter one last kick in the nuts from beyond the grave, but he's really going to be blind to just how much he's being led by the nose by Stark?

Even so, I just can't see Peter unmasking. So what's left for him to do? Well, he could use this as a bully pulpit, and try to explain why this registration act is a bad idea, followed by running for his life from Stark and SHIELD. He could try what he did to Doc Ock that one time, where he pulled off the mask in front off everyone to reveal. . . another mask. The catch would be this time, the mask underneath would be the Iron Spider mask. And he would just say he was a robot programmed by Tony Stark to simulate the "real" Spider-Man, who died recently. Spidey's death at Morlun's hands in known about, at least by the NYPD, so it might just work, except Bendis had SHIELD unmask him in New Avengers. I suppose Parker and Stark could argue he was given that human face to allow him to interact with people. The final option, and the one I like best, is that his announcement is that he's not telling them squat. Then he webs the press corps, throws the Iron Spider costume in Stark's face, and heads for the hills. Probably the most unlikely of the three.

I will admit, I really want to see want happens next month. Of course, it's in that NASCAR "I want to see a massive car wreck" sense, but still.
Posted by CalvinPitt at 3:31 PM

Couldn't have been said much better. Get some anti-registration character that can windwipe lined up to do the job on Mary-Jane and Aunt May and I'll bet you that's what happens.