Mmm, Frankfurter. Is That Something?

Couple of DC-related things, one from Jeff and two from me.

- When explaining to me why DC feels the needs to cancel JSA, then start over with Justice Society of America about three months later, Jeff mentioned that he thinks he knows who the new Starman is. Ragnell has previously suggested that it might be a time-displaced version of the Legion's Star Boy, perhaps a holdover from an earlier version of the Legion, with gravity-related powers. Jeff suggested that it's "Starman" as in "solar powers", and that it's actually The Ray, seeing as how he's abandoned his codename so that feeb with the new Freedom Fighters can have it. Being a fan of the Ray, I'd really like that, but he doesn't have the connection to those Golden Agers that Damage does, does he? Ah well, time will tell.

- As for me, I was reading Superman/Batman #26 and a thought struck. The title characters feel they must stress how important it is to keep the young Toyman on the right path, emphasizing that 'everyday Hiro Okumura walks the razor's edge between heroism and villainy.' While I'm happy that they care what happens with the kid, I think I may have noticed a trend:

Hiro Okomura - Apparently straddles line between helping the heroes and becoming a villain.

Katana - Works with Outsiders, who do the things that are too morally questionable for the "regular" good guys to get their hands dirty with.

Cassandra Cain - Based on my theory, she's turned the League of Assassins into a criminal-killing organization, meaning she's also on that line between dark and light, at least as someone like Superman or Batman would define it. Or, she's flat out crazy/evil.

Is this just a freak coincidence? Probably, but don't be surprised if we find out the new Atom is using the shrinking abilities for personal gain, regardless of whether it helps or hurts others. Because, you know, "right" and "wrong" probably don't exist at the sub-atomic level. 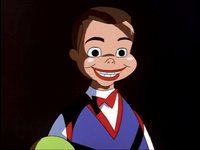 - Also, do we have any idea if Hiro has survived to One Year Later? I kind of doubt he's that freaky Toyman running around with Luthor. If so, I got a newsflash for him: Bearing a resemblance to that dude there on the left and teaming up with Luthor, is probably not going to net you Raven's phone number. Just a thought.

I don't have a problem with this evil Toyman. He's creepy, and probably dangerous, and that's fine, it's just I'd like for the kid to have survived. Sure he's goofy, and needs to take some medication to get his hormones under control, but damn it, he made a giant Composite Superman/Batman (or is it just Composite Superman?) robot! A character like that must survive! As Len put it 'It's a hell of a lot better idea than bringing back Titano.' Couldn't have said it better.

Of course, I love giant robots, and hate most primates (damn poo-flingers), so you might feel differently, but that's what comments are for, right?
Posted by CalvinPitt at 11:28 AM