Now Who's A Sadly Inadequate Poltroon? 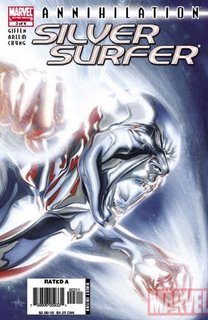 Can you tell I really love that he said "poltroon"? I was talking with Len about the book on Wednesday as I was reading it, and he commented that he felt that Annihilation was definitely doing a better job of conveying the size of the conflict than Rann-Thangar War. Annihilation (thus far) has done a good job of spreading things out, none of the characters in one mini-series are overlapping into another. Of course, Annihilation is an entire event, Rann-Thanagar was just part of one. A neglected part, so maybe it's not fair to compare. I do know I can follow this a lot easier than R-T. So, bit more in-depth look at the issue, what I like, and what I didn't.

- Firelord chides the Silver Surfer for just sitting around moping, instead of, you know, doing something.

- Silver Surfer decides to, you know, do something.

- The other Heralds start fighting the Annihilation Wave

- Morg (a crappy extreme '90s version of Terrax) is dead.

- Annihilus gets a little chippy with Thanos, and Thanos calmly reminds him who he's talking to. 'Do not threaten me. I am not one of the Lord Annihilus' drones.' In other words, Don't #$%^ with me, Bug-Boy, I wiped out half the universe. And Annihilus is a little shook. His reply, 'Of course not. . . of course not.' You can tell he's intimidated.

- Annihilus should be intimidated. Thanos is not to be trifiled with.

- Ravenous said "poltroon". I can't stress enough how much I liked that.

- Galactus smiled. Jack didn't like this, feeling Galactus shouldn't smile. Me, I liked it, because it gave you a sense of just how outmatched Ravenous and his boys were, but they had no idea.

- 'Behold the. . . SILVER SURFER Herald to Galactus!' Is this an homage? I feel like I've seen this picture somewhere before. Either way, that smile on the Surfer's face, brought an equally frightening grin to mine.

- KA-BLAM! SKRAK! BOOM! CHOOM! KROOM! That is how you wage war! Hell yeah!

- First page rundown of what's come before. It says that by Day 19 the Surfer has witnessed the destruction of the Skrull Empire and 'not a single Skrull world is intact.' Which is fine, except the Super Skrull was still fighting on Skrull worlds on Day 46. Damnit Marvel, could the editors get some coffee and cellphones, so they wake up and confer with each other?

- This means Super Skrull will fail to protect his son. That's not so bad, I figured the kid was pretty much a sacrificial offering to give Super Skrull a reason to keep fighting - revenge. If he could save his son (and the Skrull Homeworld with him) he'd probably call it a day. This keeps him in. Still, I would have liked to not have known that for certain until the Super Skrull mini-series was over.

- The Beyonder essence was still around? I thought Molecule Man killed it. Oh well, it's dead now, but that was a little disconcerting.

- Follow me on this one. Ravenous spots the Surfer parting ways with the other Heralds. He figures his forces can follow Surfer to Big G. They follow, and find the Devourer. Then Ravenous demands to know where the Surfer is, and he's quite confident, given who he's squaring off against. But then, next page he says 'Oh no. . . The Surfer's here -- Take Galactus! Take him NOW before --', and he looks terrified. Why? You were ready to attack Galactus, you and you wanted to know where Shiny-Boy was, why so freaked out when you get your answer? I know the Surfer had just gotten a power boost, but come on, you were getting ready to attack Galactus, why sweat the Herald? It just seemed like an abrupt turn, like he's manic-depressive or something.

- Tenebrous and Aegis. I'm not sure this is a neccessary addition to Annihilation. I mean, I don't see how that's going to be resolved in the remaining issue of this mini, which means it'll carry over to the actual Annihilation mini-series. But doesn't that mean the Surfer isn't actually going to play a part in fighting the Annihilation Wave? He's going to be busy helping his master against Those Two, and probably the Fallen One, who looks like he may be adapted to a weapon for those two. I suppose one could argue with the power of those involved it's more important than Annihilus' army, but does that mean that Annihilus was just a set-up to kick start the real conflict?

- I suppose that would lend strength to the argument that this was supposed to be an Infinite Crisis rip-off. They had four mini-series that set up several different problems, but it was all really a prelude to the true problem, the Pocket Dimension Quartet. God I hope Annihilation don't go like that.

- Wait, Galactus is the only person left from that battle not imprisoned in the Kyln? What about the Stranger? If Tenebrous and Aegis were, as Galactus said, going to defy the creator and remake his works in their image, shouldn't Eternity have gotten involved? I mean, wouldn't he be what they were changing, wouldn't he object? Am I overthinking this?

Guess I'll just have to wait and see like everyone else, but damn if this doesn't feel like it has the potential to be freaking incredible. Unfortunately, like anything that has the potential to reach great heights, there's also a chance of plummeting to horrid depths, where there's no light, and all you can do is watch a slide show of Infinite Crisis play across the insides of your eyelids.
Posted by CalvinPitt at 2:51 PM

Read Thanos Vol. 5: Epiphany for an explanation about the Beyonder- apparently, the power got locked inside Kosmos/Kubik, who went insane, and Thanos shut her mind down and imprisoned her in the Kyln.

Speaking of Big Purple, who wants to be he whacks Annihilus early on in the main mini, and the heroes have to take him out?

dan: Thanks for the heads up on Beyonder.

I don't know that I think Thanos will kill Annihilus (though he sure could). I think he might wait for the goods guys to trash Annihilus and his fleet, then he'd step in to try and take advantage.

Either way, he's definitely going to take a larger role.

I think it's odd that there's an inconsistency between when/if the Skrull worlds have been wiped out since one person, Keith Giffen, is in charge of this event.

I'm glad that Marvel is doing a lot of good work with Annihilation--it's not the kind of project they typically go for and it's really paying off for them. It's working out so well, I think it has more people talking about it than Civil War, which is definately backwards from what it's supposed to be.

He's pretty much the Thanos of his home dimension.

A battle between the two would be pretty awesome.