I Come To Praise New Avengers, Not To Bury It 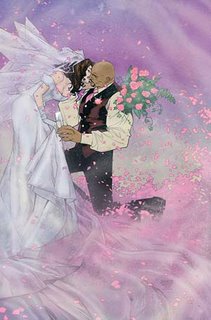 Although, when I do get around to burying it, I'm going to pick a nice spot, geologically stable, low water table, then I'll encase the issues in concrete and put them in the deepest hole I can dig. But today, I wanted to focus on the few things that happened in the first 20 issues of New Avengers that I actually liked. So let's get started, if you see an asterisk, that means there's a caveat to that particular good thing, which will be detailed at the end of the post.

- I said it long ago, that I felt part of the difference between the Avengers and the Justice League is the Avengers seemed more about giving heroes (and villains) who hadn't really moved beyond second-string a chance to prove they belonged with the big dogs. Obviously, that applies to both teams (Booster Gold, 'nuff said), but I've always thought it was more of an Avengers thing. So I was glad to see Spider-Woman* and Luke Cage** get an opportunity.

- The intial premise of a mass escape of super-villains from a high security prison, causing Captain America to see the need to re-form the Avengers. Could get a lot of good stories out of chasing down 45 escaped super-criminals, especially when one is Count Nefaria***.

- That they actually went to capture one criminal (Sauron), after capturing the one who caused the escape (Electro)*****.

- That during that fight, Captain America richocheted his shield off Wolverine's head.

- That SHIELD Commander Hill is initially skeptical of this team******. Some of the characters have questionable histories, she doesn't have the past with some of them Fury did, the Disassembled debacle would make most people nervous, and Cap and Iron Man kind of ignored her concerns and did whatever they wanted.

- That the team went out and caught another escaped villain - The Wrecker*******.

- That Michael slapped the Sentry around like a silly twit.

- That Captain America had to tell The Sentry to stop crying in bed and come fight. Sure, it was pathetic, but it was still funny.

- The New Avengers Annual. Humor, powerful villain, everyone on the team got to do something, The Sentry got, once again, smacked around like a silly twit, Warbird was involved. A wedding. Stan Lee cameo. Good times all around************.

I think that's all I got. If you have one, feel free to add it in.

* Except for the fact Bendis focused entirely too much on her espionage roots. Avengers needs to have big explosions more, sneaky spy stuff less.

** Except Luke seems to have been amped up in strength for no reason I can figure. I'm looking at his Marvel Universe Series 4 card, he's a Level 4, which means he's as strong as Spidey at best, but he seemed amped up near She-Hulk levels. When he actually got to do anything, which was rare.

*** Except for that bullcrap about Jigsaw breaking Spidey's arm "because he had leverage".

**** Except The Sentry did that, and Carnage shouldn't have been there, since Venom absorbed the symbiote off of Cletus Kasady years ago.

***** Except that probably shouldn't require a team, and it tied into the espionage stuff too much.

****** Except they could have begun moving past that, before her abrupt defense of them in #20. Seriously, talk about out of left field.

******* Except Spidey could have done that himself in two issues. For four super-heroes, that should take half an issues, tops.

******** Except, as noted by the Guys Who Buy Comics the Avengers shouldn't fight ninjas, because they're the bloody AVENGERS!

********* Except we shouldn't have seen him at all. Did I say 'him'? How clumsy of me. I must have been thrown off by the massive muscles, or maybe the fact that should have been Daredevil or Iron Fist's spot.

*********** Except the final issue made no sense whatsoever. Xorn? Magneto repowered? Zombies?

************ Except it took Bendis forty pages to tell the story, although to be honest, if he told that story over two months worth of New Avengers, I doubt I would complain much. It'd far and away be the most interesting two months of the book so far.

Hmm, I think I've done a better job burying New Avengers than praising it. Oh well, that's on the guy who wrote the book, not me. I can only work with the material I'm given, after all.

Posted by CalvinPitt at 9:50 AM